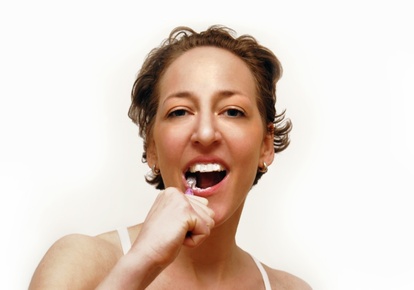 Toothpaste without triclosan and microbeads

More and more, the ingredients of cosmetic products are debated controversially, as they are suspected to be carcinogenic or have negative effects on our health. In toothpastes we can find a few of the these “suspicious” substances: Triclosan or microbeads. Consumers are concerned which is justified.

Triclosan has been the most controversial substance in recent years. It is suspected to be carcinogenic and develop bacteria resistances . Triclosan could already be detected in the urine of pregnant women and even in the cord blood.

Triclosan is mainly used as an active ingredient in detergents (especially in hospitals) and is added in toothpastes due to its bacteriostatic effect for the protection against periodontitis. In the US, the substance is no longer used in some products – a first step in responding to the concerns of the consumers.

The State of Minnesota plans to ban triclosan in some products from January 2017. In Europe, soaps, body washes, deodorants, or even toothpastes can still contain triclosan. Meanwhile the German Federal Institute for Risk Assessment advises against the use of triclosan as disinfectant in the household.

Triclosan is also a thread for the environment: Through the sewage it seeps into rivers, lakes and oceans, where it destroys particularly sensitive algae, which form the food base for fish.

Likewise microbeads – solid plastic particles of less than five millimeters – have been added to toothpaste. Most toothpaste brands have already banned them but still some major brands use them. You can easily spot them on the list of ingredients as Polyethylene (PE) or Polypropylene (PP).

They still play a major role in facial scrubs and are a big threat to the environment and the human health. They can hardly be filtered by sewage treatment and end up in marine organisms.

They can also enter the human tissue and accumulate there. It was reported already that in some cases microbeads have been found under the gums, causing irritation. The effect that whitening toothpastes with microparticles promise are not worth the risk. You better use a professional whitening by a dentist.

Next time you buy toothpaste have a look at the ingredients.

Another controversial substance is SLS (Sodium Lauryl Sulfate). Find out more about toothpaste without SLS here.

Shampoos without Alcohol and Sulfates

As an Amazon Associate we earn from qualifying purchases.